Joel Bray in Dharawungara, as part of Next Move 11. Photo: Pippa Samaya

Next Move has been part of the Chunky Move annual repertoire since 2008, when then artistic director Gideon Obarzanek commissioned Antony Hamilton and Byron Perry’s I Like This.  Since then, this program has fostered an impressive range of emerging choreographers, among them Atlanta Eke, Stephanie Lake and Michelle Heaven.

For her final commission as Chunky Move artistic director, Anouk van Dijk programmed short dance works from two choreographers – Lauren Langlois and Joel Bray. It’s hard to think of a more contrasting pair of works: one springs from a science fiction vision of the post-human, while the other recreates an Indigenous ceremony in an attempt to reconcile a broken past with a broken present, in order to create a future.

Langlois’s Nether begins with a spectacular display of white lasers, emanating from a single source to create sheets of light that carve the empty space into a dynamic geometry. Along with Alisdair Macindoe’s pulsing electronic score, Amelia Lever-Davidson’s lighting design is a major feature of the performance: it makes light seem a material object, dividing the space like pulsing fabrics, and interacting with the two dancers, Langlois and James Vu Anh Pham.

The costumes, designed by Harriet Oxley, are made of a peach-coloured gauze, which disconcertingly blurs the boundaries of the dancers’ bodies. James Vu Anh Pham first appears out of darkness in an impressive reveal. After the light display, my sense of the space was confused and he appeared to be standing in mid-air, an illusion of depth created by the reflective floor. Langlois appears, partly visible, in another adjoining space. 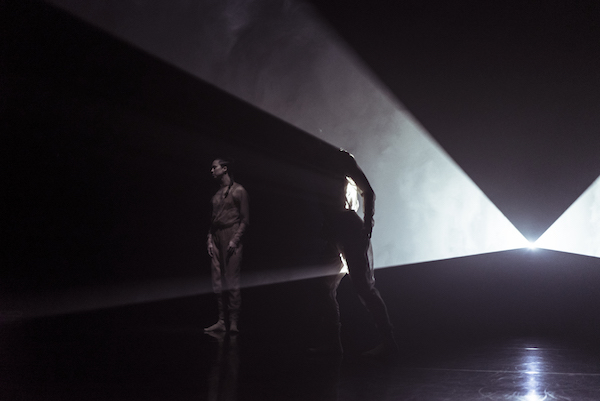 Pham’s body moves through these curtains of light as if they are material boundaries. The transitions through these thresholds made me think of Bill Viola’s video installation Ocean without a Shore, a deeply moving work drawn from Sufi mysticism that explores the permeable barrier between life and death. The membrane that separates the souls in Viola’s exhibition is a veil of water, rather than a sheet of light, but the movement of interruption and pushing through is very similar.

This association no doubt accounts for my musings through much of the show: the indeterminate bodies and the sense of threshold made me think more of post-death states than of post-human bodies (though I guess being dead is a kind of post-human state). It seemed for much of the dance to be a representation of something like the Buddhist idea of bardos, the liminal states of being that a soul passes through between death and reincarnation.

Certainly, Langlois’ choreography – exploratory shuffles and clawing at their own bodies, staccato gestures that seem like a kind of neurosis – evokes creatures unfamiliar with their own bodies, like lost souls discovering a new physicality, and even sometimes a sense of trauma. Pham and Langlois’s extremely articulate bodies are riveting to watch, although I did feel there were moments in the larger dramaturgy of the piece where the movement was merely repetitive, rather than deepening the performance.

Nether couldn’t be a greater contrast to Joel Bray’s performance, Dharawungara. It open with a contextual introduction that sets up the dance. Bray, who explains that he is from Wiradjuri and Scottish heritage, saunters on to the stage with sound artist Naretha Williams and begins a monologue. The set, designed by Kate Davis, is littered with black balloons gathered together in nets, strange bulbous objects on a set that is otherwise practical: a trolley with a teapot and tea cups, a couple of chairs, a sound desk.

This performance is all about absence. Bray explains that he is recreating Dharawungara, the ceremony through which Wiradjuri boys transitioned into adulthood. He only knows about it because he read an account of the ritual by a 19th century anthropologist on the internet. The tone of the introduction is light-hearted – Bray gets audience members to participate in setting up his dance, working the smoke machine on his foil fire, or daubing him with Dulux “Immortal Wisdom” paint – but what Bray tells us is anything but light-hearted.

Part of his need to create this dance is driven by the death of his brother, one of the many casualties of the dispossession of colonisation. And the structure of this performance, both emotionally and dramaturgically, searingly opens this multiple loss. Bray tells us it’s possible that his great grandfather was at the initiation ceremony described by this anthropologist (I can’t remember his name, although it is, as Bray says, something like RM Williams) and lays out the scraps he can glean from the description. There are arm gestures like the flapping of duck wings, imitations of hedgehogs (echidnas, presumably), a constantly burning fire, the presence of the spirit, the body paint. He recreates each of these from the materials he has to hand.

When he begins the dance, the shift is remarkable: we watch as the elements Bray has casually put together are transformed into dance of urgency and beauty, as he himself begins to embody the spirit of transformation, of crossing the threshold into another state of being. There’s no pretence to “authenticity” here: what we are watching is not only a process of reclamation, but an act of creation. Williams’ sound design, which accompanies the whole show, is as transparent and ingenious as the movement: electronically treated live sound, such as the rattle of teacups, is entwined with drums, electronic pulsing, the crackle and pop of a fire.

I felt that I was watching (participating) in a sacred ritual. According to some thinkers, all rituals are recreations of origin, which is a paradox in itself. This performance seems to hold this paradox, going back to the beginning but also creating something entirely new. What’s undeniable is how moving this performance is, in ways that you don’t expect: it’s sharp, unsettling, urgent. It’s both a personal rite of expiation and empowerment, and a mourning for the immeasurable losses of colonial dispossession.

And then, when Bray has finished, he sits down for a cup of tea with Williams. “Was it worth doing?” he asks. “Yes,” says Williams. Yes. It was.

Ticking boxes at the School of Rock

Where We Stand: trauma or ritual?

Taking the Waters: Waiting for death

Earshot: the poetry of the everyday

The children are rising

The Audition: less than the sum of its...

Unwoman: the endless circle of reproduction

A romp into the darkness

We need your help

Like many small organisations, Witness runs on the smell of an oily rag, which is to say the largely unpaid working hours of Alison and Rob. (We always pay our contributors, though.) And a website like this has ongoing expenses. If you believe that what we're doing here matters, please think about supporting us! You can help to fund robust independent discussion and make Witness sustainable for as little as $5 a month by signing up at this page. If you're already a Witness supporter, our earnest thanks. You can login here.
Holler Box