The mysterious joy of articulate bodies

Watching Jo Lloyd’s Overture and Alison Currie’s Concrete Impermanence on successive nights, I found myself wondering why contemporary dance can feel so satisfying as a response to the anxieties of our age. Sometimes the metaphorical density and open-endedness of dance – interestingly, its articulation of thought – seems to permits a depth of response that can be inhibited or coarsened by mere words.

#NotAllWords, of course. One of the tasks of the playwright (or, indeed, any kind of creative writer) is to reinvest language with its density, to give meaning and vitality to the words that we casually use and abuse every day. The knockabout usages of language often work subliminally, so language becomes a miasma of ghostly resonances that channel meaning below conscious thought. A lot of political speech, for example, relies on language being half-dead.

Stripping language out of performance, as dance (mostly) does, can bypass these zombie meanings. Human communication is a rich field that includes gesture, facial expression, spatial relationships, visual signs and other kinds of meaning-making that have nothing to do with words. This property of wordlessness is, of course, one of the reasons why it’s so hard to write about dance or, indeed, any kind of performance: doing so requires translating unspoken communication, a process that can never be more than an unsatisfactory paraphrase. Hence the famous, possibly apocryphal, story about Martha Graham: when she was asked what a dance meant, she simply repeated it.

Certainly, it seems impossible to paraphrase Jo Lloyd’s Overture. This work spirals out from Felix Mendelssohn’s overture to A Midsummer Night’s Dream, which comprises the music for the central part of the dance itself. An overture is a beginning, in musical terms an introduction that rehearses themes that will follow in the substance of the work. Lloyd and her collaborators open this idea up into a dance that, although it’s only an hour long, feels mysteriously epic.

Eyeblack darkness lifts to reveal a narrow stage behind a gauze curtain, through which we peer at four dancers (Deanne Butterworth, Rebecca Jensen, Shian Law and Jo Lloyd) in various modes of preparation (they’re always in preparation). They dress and undress: sometimes they’re veiled like a bride, or more subtly hidden by a nude body costume, or are naked. One wears a fake beard. The costumes here are not so much dress as fabric-in-play. Dress-ups.

The opening introduces the sense of play that underlines the whole performance. In this act, the dancers seem to be backstage, preparing: they line up, posing like models, before running behind the curtain behind them, perhaps performing to an unseen audience. From here, the dance moves through different acts, each signalled by a change in staging. Aside from the various curtains that expose and hide the huge Town Hall stage, all the props are manipulated by the dancers. When they change their costumes, they either do so on stage or retreat to curtained alcoves where they are still visible to the audience. Every mechanic in this performance is exposed, which paradoxically intensifies its sense of mystery.

Central to this dance is the body, masked and unmasked, veiled and unveiled, clothed and unclothed, embodiments that constantly ripple through inventive variations. This dance asks us to consider how perception is directed by context, how bodies – especially female bodies – are framed and disclosed. The only dancer who is never quite naked is Shian Law, who is also the only man on stage.

In one sequence the dancers play stylised picture frames, twisting around and through them, falling again and again into the pose made famous by Gustav Courbet’s painting of a naked woman, L’Origine du monde (The Origin of the World). Deanne Butterworth, at this point in a nude costume with a bright pink stripe over her vulva, literally inverts this painting: what she reveals is completely hidden.

The work intensifies beneath its playfulness to a strange, unlocatable tension, a feeling that for reasons I can’t trace seemed to be touching the edges of trauma: maybe the constant shifting of costume underlines the vulnerability of these four bodies, maybe it’s a sense of invested autobiography as the dancers face away from us, propped up on their forearms, shouting contextless phrases into an apocalyptic light.

This tension explodes into the Mendelssohn sequence, the longest in the dance, which is a sheer delight: it features beautiful chorus work that unfolds, shifts, satirising and also playing homage to the music, the choreography constantly reinventing itself in new variations. Lloyd’s choreography and the dancing are razor-sharp throughout, riveting attention and abolishing time. The overture ends where we began, back behind the gauze curtain, with Jo Lloyd herself ripping up a script. An overture to what? A newly liberated life? Somehow Overture feels this significant. I’m still not entirely sure why. 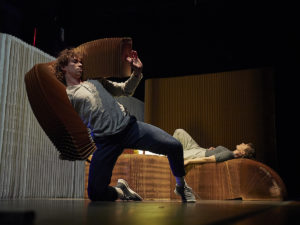 Alison Currie’s Concrete Impermanence, playing at the SubStation, considers the sense of destabilisation that occurs when things we assume to be solid turn out not to be solid at all. It seems to be inspired at least in part by the 2011 Christchurch earthquake, but its inquiry encompasses all kinds of anxiety, from environmental catastrophe to personal trauma.

There are some striking commonalities with Lloyd’s piece, not least the sense of dancers interacting with material objects. You’re always conscious of the qualities of the objects on stage: Lloyd uses thick fabrics, polystyrene blocks that squeak when dragged on the floor, rustling curtains. A major star of Currie’s show are the extraordinary sculptural pieces designed for the dance by Stephanie Forsythe and Todd MacAllen. They are concertina-like things made of paper, that can close to a flat book or open up to walls or structures that are metres long. Built out of triangular folds, they are amazingly strong, able to support the weight of a body, but simultaneously have the fragility of paper.

Currie and her fellow dancers, Harrison Richie-Jones and Stephen Sheehan, move in and beyond these objects, constantly transforming their relationships to them. They create domestic spaces, with chairs and books; they become houses that breathe with a body, or extensions of costume; walls that enclose or swallow; spaces that exclude the solo dancer. The choreography moves mainly between solos and duets – the dancers seldom perform in a trio, so there is always one person is isolation – flinging bodies against each other in crisis, or collapsing them under the weight of gravity.

Alisdair Macindoe’s score consists of rhythmic sampling – breakages, nervous pulses, electronic pulses – that are expressed on a screen with a visualiser, especially included so Deaf people can experience the sound. Around two-thirds of the way through, I began to feel that the choreographic language was thinning out into repetition, that somehow the richness that held me initially was becoming – too literal? Certainly something in its precision and invention slipped, so the anxiety brooding beneath became less suspended, more concerned to nail down its meanings. It finishes with words – newspaper headlines about earthquakes – that suddenly enclose the performance in banal literalness. It so didn’t need this enclosure. Beware words.

Sneaking up for a gut punch

A dance of words

In a world where space for arts discussion is always shrinking, Witness makes the space for new voices and new views. But like many independent organisations, Witness runs on the smell of an oily rag. If you believe that what we're doing here matters, please think about supporting us! You can help to fund robust independent discussion and make Witness sustainable for as little as $5 a month by signing up at this page. If you're already a Witness supporter, our earnest thanks. You can login here.
Holler Box