Unwoman: the endless circle of reproduction

The Rabble’s triptych Unwoman is a scorching examination of how the reproductive body is controlled and policed.  And, says Alison Croggon, it’s extraordinary theatre

Disclosure: Alison Croggon collaborated with The Rabble as the writer of My Dearworthy Darling, which was presented at Malthouse Theatre earlier this year.

Woman, as a capital W abstraction, has long been associated with Death. There’s the femme fatale, the vagina dentata, the “nightmare death-in-life”; the tropes of maternal horror in film such as Alien or Hereditary; the endless beautiful female corpses that decorate television crime shows.

Partly it’s because the female body conceals the mysterious ability to create life, and the other face of life is death. But it also reflects something deeper: the inescapable embodiment that is associated with being female. To be wholly embodied is to be wholly mortal.

In Christian iconography, the three enemies of the soul are “the World, the Flesh and the Devil”. The World is often depicted as a woman, and the Flesh always is: Woman is the archetypal symbol of lust, leading the manly soul to eternal death with her succulent temptations, just as Eve’s decision to reach for the “intellectual fruit” of consciousness led to mankind’s exile from Eden.

In these traditions, to be female is to be unable to transcend the body: one is defined by the body and may not be perceived as anything but the body. Men have outsourced their mortality, their fleshliness, to women. Women are not able to transcend their bodies, although they may be permitted to renounce them. Even a hundred years ago, it was common to debate whether women had souls.

Throughout western history, this notion has been reflected in our languages: our scripture, literature, philosophy and laws. The word of a woman is proverbially given less weight than a man’s, dismissed as “old wive’s tales” or “gossip”. In democratic Athens, a tradition that continued for millennia throughout Europe, women were excluded from public office and from law courts– the very word “testimony” is derived from male sex organs.

Women’s legal rights were determined and circumscribed by their relationship to men, and although the laws varied across Europe, in almost all cases a woman was considered a chattel. The reason marital rape took so long to enshrine as a crime was because rape was part of property law – rape was a crime against the property of a man, not against a woman, and, of course, a wife was legally her husband’s property.

This is both reflected and perpetuated in language – especially written texts. The shift from oral to written language remains one of the major evolutions of the human species: knowledge no longer required physical presence, a memory stored in a mortal body that needed to be passed from mouth to mouth. In 2019, we can read the thoughts of others across millennia, across continental distances. Language is an astonishing power.

Women have always reached for this power, just as Eve reached for the Tree of Knowledge; and their desire for language has always been a threat to the patriarchal order. Unsurprisingly, our written texts have long been unkind to women. And to speak freely of the experience of women is still a scandalous act: witness the fuss only last week around Mona Eltahawy’s appearance on the ABC’s QandA, when she talked about the violence routinely done to women’s bodies.

I don’t believe I’ve seen a work that so crushingly enacts the intolerable embodiment of reproduction in a patriarchal world.

To be pregnant is to be doubly bodied: it is to feel the weight of two, the haul of gravity increasing through gestation towards the torrid physical tumult of labour. That on its own would be enough. But it also means entering the mythological landscape of Motherhood, the brutal ideology that shapes and distorts reproductive experience into a prison. The Mother is at once idealised and despised, placed on a pedestal and erased, worshipped and shamed. How does a human self survive these pressures?

Unwoman doesn’t answer this question: it simply presents aspects of reproductive experience. It’s effectively three separate works on the same theme, all of them astounding. They’re linked by a teenage girl, Mila Jennings, who walks on stage between acts, sets up an egg timer, and in the allotted time picks up a card from a huge pile and reads it out loud. On each card is a short testimonial (that word again!) of a woman’s reproductive life, which were collected online by the Rabble.

These readings underline starkly how infinitely various the experiences of reproduction are. People give birth as women, as men, or choose not to give birth; they have babies, abortions, miscarriages; they experience delight and terror and fear and pain and love. But the mythologies around pregnancy and birth whittle all this variousness down to a bunch of anodyne stereotypes.

Part I is the fairytale. It features five heavily pregnant women – Annalise Matthews, Toni Main, Robyn McMicking, Anna Nottle and Mattie Young – whom we first see seated on the floor in pink princess dresses that emphasise their bellies, brushing their long hair. 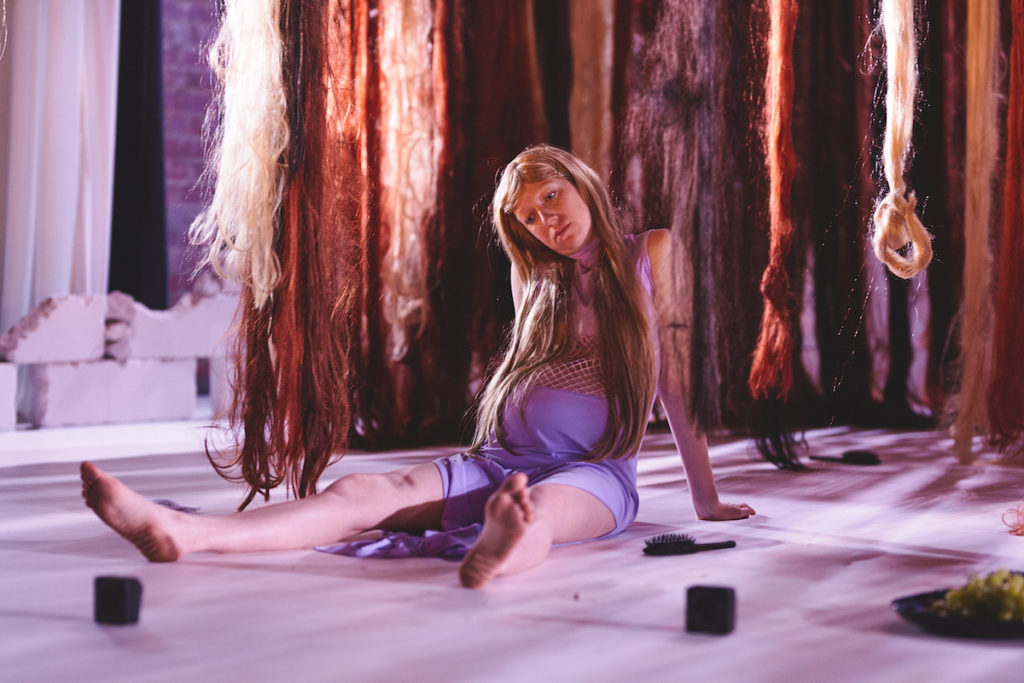 They’re trapped like Rapunzel in a tower, represented by a low, circular pile of crumbling bricks. Kate Davis’ extraordinary design suspends long ropes of human hair from the flies, but here they are not roads to escape: they hang there teasingly, to be brushed by the bored women. They are in an anteroom, trapped between one life and another, circling clockwise around the stage. As they become more bored, their dissatisfaction and irritation becomes comically palpable: and then –at last! – an alarm clock goes off and one of them goes into labour. The women excitedly circle her, and the light intensifies, golden, preparing her for the gloriousness of giving birth but then…it’s just a false alarm.

Part II, featuring Dana Miltins and Mary Helen Sassman, is again in a kind of anteroom, but this time they are both waiting for some kind of medical procedure. There’s a sense of the sinister underneath this work, although we’re never quite sure what it is: are they being punished? Are they imprisoned in some kind of reproductive police station?

All the lush sensuousness of the previous scene – the hanging hair, the pink and gold, the swelling bellies – has vanished: now we are in a coldly lit, empty space. Two woman are seated in chairs that look medical, or torture devices. A rope descends behind each woman, and suspends itself ominously behind their heads.

They talk. They talk frankly, painfully, hilariously, about their experiences of reproductive life. Having a miscarriage. Stitches. The first poo after childbirth. Exhaustion. Their dialogues are punctuated by loud beeps and blackouts. Sometimes the lights come up and they’re laughing (“hysterically”), laughing and laughing. Sometimes they’re fighting, judging each other. Sometimes they’re just looking out at us, the audience.

“My body is broken,” says one of the women.

My body is broken.

(Labour breaks bodies. There are the men who work in foundries, on building sites, in factories, who spend their strength in all the temples of industry and end up with warped hands, destroyed joints, black lungs, broken bones, who end up dead. And then there are the women who labour and split open their bodies, whose uteruses prolapse, whose perineums tear and split, whose hips were sawed open – oh my god, the horrors of the symphysiotomy, which was performed on women in Catholic Ireland because the Church didn’t approve of caesareans. Nature is cruel, but patriarchal religion can be crueller still.)

Part III gathers all this suffering into a brutal performance of a labouring woman. This piece was co-created with Maeve Stone and performed by Olwen Fouéré for the 2018 Dublin Festival, but here is performed by Yumi Umiumare. It seems so much Umiumare’s work that it’s almost impossible to imagine someone else performing it.

Again, it’s wordless, although it’s heavy with vocalisation. We see an exaggeratedly pregnant woman in a black dress seated on a chair in what is now a completely empty space. A rope swings down from the ceiling and is attached to her back, like an umbilical cord. She is in labour. Constantly in labour. She squats, groans, screams, grunts, gets down on all fours, staggers around the space. Eventually its reaches a crescendo and she gives birth to… a stone. She collapses on her side, exhausted.

But it’s not over. She labours again. And again. And again. She is trapped in the endless circle of her reproductive body. There is another stone, and then another. Like Umiumare, we are trapped punishingly in the present, unable to escape. She is compellingly, intolerably, there, and we are forced to labour with her. There is no beginning and no end: time is suspended.

But finally, there is an end; or, if not an end, a kind of restoration. A black and white close-up of Umiumare’s face, as she vocalises – what? Outrage, pain, anger, sorrow? No, a sublimely black laughter, an obscene act of defiance…

Unwoman is an extraordinary work. It’s gruelling, no question; but also beautiful, funny, scorchingly truthful, and meticulously and rigorously rendered. Nobody else makes theatre like this. If the possibilities of theatre interest you at all, you’d be mad be miss it.

Warnings: Unwoman addresses themes of birth, labour, pregnancy, fertility and abortion. There are graphic descriptions, strong language and themes, and loud sounds and use of haze.

Getting a sense of Aboriginal humour

The Audition: less than the sum of its parts

Just another day in the colony

Things that go bump in the night

An exercise in sustained dread

In a world where space for arts discussion is always shrinking, Witness makes the space for new voices and new views. But like many independent organisations, Witness runs on the smell of an oily rag. If you believe that what we're doing here matters, please think about supporting us! You can help to fund robust independent discussion and make Witness sustainable for as little as $5 a month by signing up at this page. If you're already a Witness supporter, our earnest thanks. You can login here.
Holler Box