Consuming dance at the Melbourne Festival

At first blush, the dance program at this year’s Melbourne International Arts Festival is a bit disappointing.

There’s only one premiere – Antony Hamilton’s Token Armies for Chunky Move – and the bulk of the program is local works that have been seen in this city before – Stephanie Lake’s extraordinary Colossus, for instance, which featured at last year’s Melbourne Fringe, or Lucy Guerin’s Split, which premiered at Dance Massive in 2017, or Jo Lloyd’s Overture, which I saw at Arts House last year.

All these works deserve to return, no question; and being in the festival brings them to the attention of a wider audience than the dance fiends who closely follow these choreographers. I guess I’m used to having my novelty sensor tweaked by festival programming, and felt the lack of it here.

But it did make me think about the consumption model that underlies the arts. The phrase “arts consumers” has always made me flinch: for me it summons an image of a predatory maw compulsively swallowing art and then moving on, hungry for the next new sensation. It’s a cycle of churning production that reflects the disposable culture in which we live.

It’s disconcerting to discover the same impulse in myself. Maybe we should spend more time making less art, and value the work that already exists more. Maybe we should revisit and reconsider works more often. It takes so long to make, after all; and art isn’t about the dazzle of novelty but the deeper rewards of contemplation.

Despite these thoughts, the first two works I saw at the festival were new to me. Branch Nebula’s High Performance Packing Tape premiered at Liveworks in Sydney in 2018, and comes to Arts House for the festival after a season at the Sydney Opera House last month. It’s an intriguing work – a one man show performed by Branch Nebula co-founder Lee Wilson, in which we watch a man pit himself against cardboard boxes, packing tape and office furniture.

‘As Wilson’s tasks accumulate, so do the meanings around them. What seems to be a process-led performance becomes insensibly darker.’

The stage is carefully laid out with all the materials that Wilson will be using during the course of the show – cardboard boxes of various sizes, a rig that will later to be used to fashion a slackline, a man-shaped suit that appears to be made out of bubble wrap. In the middle of the floor Wilson lies on his back, blowing up a huge yellow balloon. The beat is his amplified breath. I admire the iron discipline of his diaphragm. He keeps blowing up the balloon until, inevitably, it bursts. It still startles me.

So, I think, as I watch him move to the cardboard boxes, meticulously placing three high boxes one on top of the other in order to lift and balance them: this is a process, a serial testing of materials in which the human body sets itself against the physical stresses of the world it encounters. No, the male body – this is very definitely a male body, a middle-aged, bespectacled man in brown shorts and t-shirt – performing a suburban masculinity.

For a while, the various tasks Wilson completes bears this out. I’m very happy to watch him because of the precision of his labour; I’m aware from the beginning that his is a skilled and careful body. He builds a pyramid of boxes and climbs it until the boxes crumple under his weight, and he falls to the floor. He takes a roll of packing tape and begins to tape the slackline poles together, stepping over four plastic chairs. One roll, two, three rolls. Another. His labour is both concentrated and absurd, and laughter ripples around the auditorium.

As Wilson’s tasks accumulate, so do the meanings around them. What seems to be a process-led performance becomes insensibly darker. When he strips off his clothes, it suddenly feels much more abstract, and more viscerally risky. There’s a moment in which he suspends his naked body in rubber loops from the slackline, which is startlingly grim: he suddenly seems like a carcass. And then a rubber snaps with a comic boinggg sound, and the body slips towards the ground, and it’s a weird collision between Cartoon Capers and Stelarc.

I’m increasingly aware of the tension of the packing tape as it rips off his body, of the stanley knife with which he cuts the tape so close to his skin, of the fact that there’s no safety net and that he’s climbing up into the flies of the Meat Market and wrapping himself in transparent packing tape in a way that’s at once outrageous and abject and strangely hilarious. Wilson’s final task is exhilarating and oddly liberating: a man-package, claustrophobically taped up, soaring across the space, swinging lower and lower as gravity exerts its pull. There’s a sense of breath finally released, of an obscure darkness expiated. 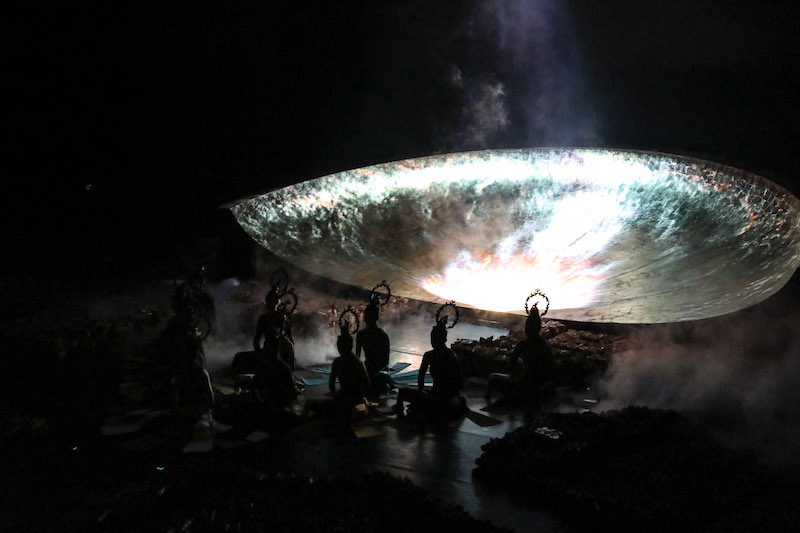 The dancers are already on stage when the audience enters: 13 women in extraordinary jewelled head dresses sitting cross-legged, completely still, while a monk mysteriously labours around them. He seems to be paving the floor with the large, flat models of Chinese ideograms that are the main props, and which are piled high like bones to the left of the stage. He kneels down and prays, and then slowly makes his way back stage, into the shadows, a huge basket full of ideograms on his back. And then the performance proper begins.

The dance is in three acts and is 75 minutes long, in contrast to Igor Stravinsky’s relatively modest 40 minutes. Stravinsky’s score constitutes the middle act, and it’s bracketed with two compositions by Xuntian He – Incantation and Renewal – that mainly employ traditional instruments, some treated electronically – gongs, cymbals, flutes – to create a minimalist score in marked contrast to Stravinsky’s ebullient modernism.

Yang’s work draws on Tibetan symbolism to retell the story of the maiden sacrificed to ensure the next year’s harvest. Instead of dancing herself to death as the Chosen One, this maiden consciously chooses to sacrifice herself for the greater good, knowing she will be reincarnated at a higher order of being.

There’s a narrative behind Yang’s choreography that is obscure to anyone not privy to the Buddhist symbolism that animates it, which includes me; but it was made more confusing because sometimes I wanted to watch without inscribing narrative meaning, and then was pulled up short by a feeling that I should be reading narrative into it. Was I following a story, or not? (Was I supposed to follow it, or not?)

Some of the sequences are outstanding: the eroticism that underlies the entire piece, hinted early in hand work that curled like sensual flowers, culminated in a duet of astonishing sexual frankness that was also, at the same time, a beautiful abstract dance. In another, the women stood in a line, their feet secured in a bracket that allowed them to bend and flow like reeds or – when their fingers were illuminated green under ultraviolet light – like the rippling tendrils of a coral reef.

Strangely, the enchantment fractured for me when Stravinsky’s music started. Somehow it seemed bombastic and kitsch after the delicacy of what had gone before, too much like the score of a Hollywood film (you realise how much modernist composers have influenced film music), and the dance began to feel like illustration or mere exhausting spectacle. Sometimes – especially in dramatic moments involving the huge lion on stage – it seemed overwrought and comic. (But not always: the lion’s first appearance – a huge, shamanistic figure with extraordinarily beautiful masculine legs stepping over a young girl – was disturbing, strange, striking and, of course, erotic.)

Designed by Crouching Tiger, Hidden Dragon arts director Tim Yip, it’s always spectacular to look at, in ways that are constantly surprising. The stage is dominated by a Tibetan bowl that gleams metallically in the exquisite lighting (by Fabiana Piccioli) and that creates a horizon for smoke effects that seem like clouds in some apocalyptic weather system. There were moments when these visual effects were moving in their own right, as powerful, resonant images.

I found Rite of Spring exhausting; in part, I think, because I was constantly oscillating between polar responses from moment to moment. By the end, it seemed too simple for the sum of its parts, trembling on the edge of kitsch artefact: but there was so much in it that was so much more than that. It felt like a kind of aesthetic whiplash. And I find myself still not quite sure what to make of it.

Anthem for the doomed underclass

Charlie and the War Against the Grannies

Comedy Festival: Lano and Woodley in Lano and...

Because the Night: Malthouse Theatre

“Maybe we should spend more time making less art”: words I am living by. But you’d have to be a fiend to consume more than I am doing. (Maybe I am, or at least my partner is.) Everything is available—in my city it’s a smorgasbord, continually replenished—and much of it freely. The best artists seem to come here—you wonder leaving behind what kind of dearth? Meanwhile we are killing the planet.